The growing concern about safety and sustainability of nuclear power plants has a significant impact on the maintenance of the existing power plant structures. The recent accident in Fukushima Power Plant inJapanspurred activities in energy industry world-wide and opened questions of safety of the existing power plant structures. The seismic loading is one of the most sever environmental actions to be considered in design. It is evident that during the life time of existing power plants, the world-wide research effort brought a range of innovations for the seismic design. One on them is the push-over analysis method, which is suggested by major design codes but was not a design practice at the time of the constructions of the power plants. Today it serves as an established tool for the assessment of seismic resistance. 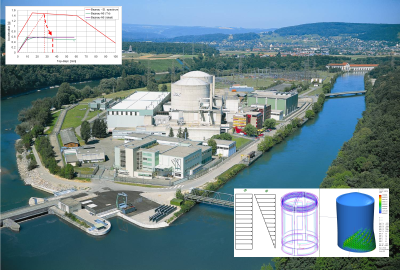 The investigated reactor building consists of the concrete internal structure, the steel containment and the shield building, i.e. outer wall.  This paper describes the pushover analysis of the outer shield building of the nuclear reactor. This building consists of a cylindrical wall with the thickness of0.9 m. The top of the building is covered by a spherical dome with the wall thickness of0.75 m. The dome and wall are connected through a pre-stressed reinforced concrete ring with 14 pre-stressing tendons. There are no pre-stressing tendons in the wall or in the dome. The interior of the building is covered by6 mmof steel liner. All these elements were included in a three-dimensional model, which was analyzed by finite element simulation software ATENA.

Several pushover analyses were performed. One analyses used average, i.e. median parameters and the second one with characteristic parameters. In addition, due to the asymmetry of the control room building  the pushover force was applied in x and y direction with positive and negative orientation of the pushover force direction.  The pushover curves in  are transformed into the acceleration displacement diagram, which allows their comparison with the local seismic demand, which is defined by the elastic response spectrum. The figure shows that the displacement capacities for the idealized bilinear pushover curves for the outer shield building are 233 mm for median analysis and 133 mm for characteristic. This is to be compared with the seismic demand, which would be 22 mm for the medium and 13 mm for the characteristic analysis. This results show very high seismic safety. Furthermore, the idealized curves were used by the plant owner for a more detailed semi-probabilistic analysis and for the calculation of the fragility curves.

The nonlinear pushover analysis using advanced material models based on fracture mechanics and plasticity was used to evaluate the sustainability and safety of an existing nuclear power plant. The results confirmed very high seismic safety. Two pushover curves were calculated for the estimation of median and characteristic response. This allows the application of probabilistic approaches for the evaluation of seismic fragility curves.