The third application example comes from a 660 MW coal power plant project (Fig. 9), where splitting cracks were observed in massive concrete columns during the construction. These columns have the dimensions 5x5x4.57 m, and they support the boiler chamber with total weight of about 672 MN. Approximately 1 year after the construction, vertical cracks up to 0.5 mm were detected in the middle of the columns (Fig. 9) . It was assumed that the hydration heat, shrinkage and insufficient reinforcement (Fig. 10) might have been the main reason for this cracking. The nonlinear analysis  was used to confirm this assumption and to evaluate the effect of this initial damage on the strength and reliability of these critical load bearing elements.

The analysis was divided into three phases: the period 3-180 days, i.e. from the column casting up to the gradual introduction of the loads. The second period from 180-720 days, which represents the time of the building construction when the cracks were detected. The crack pattern and crack width at this time is shown in Fig. 11c. In the third phase, the columns are loaded up to 100% of the design load and overloaded up to failure to evaluate their ultimate strength (Fig. 12).

The analysis showed that the cracking was mainly caused by the hydration heat, which reached about 61°C in 8 days after casting (Fig. 11b). The predicted crack width is about 0.23 mm, which compares well with the measured crack widths in the range of 0.1-0.5 mm.

The load carrying capacity of the columns is shown in Fig. 12. It compares the load-displacement response of a pure static analysis with the analysis using a combined hydro-thermo-mechanical model Jendele et al. (2013). The result of the new model is depicted by a solid line. Initially, there is no load, but the vertical deformation increases due to the thermal effects, which is followed by a decrease due to shrinkage. After that the load is increased up to 40% of the design load to simulate the situation after 720 days. This load level is kept constant for 540 days while the creep and shrinkage further decreases the deformation. This is represented by the short horizontal line. After that the column is loaded up to failure. This response can be contrasted by the pure static analysis depicted by the dashed line, which shows a smooth response up to failure. The analysis confirmed that the columns have a sufficient load carrying capacity, i.e. the overloading factor is about 2, while the required global safety factor according to the EN 1992-2 approach is 1.27. However, due to the initial cracking the column strength was significantly reduced by almost 30%. 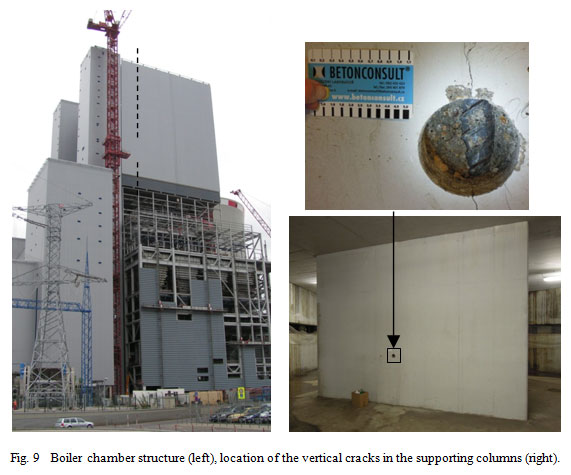 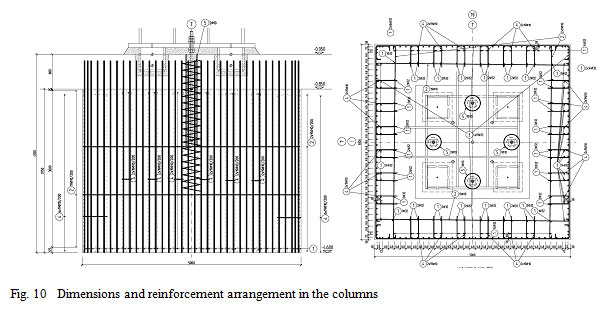 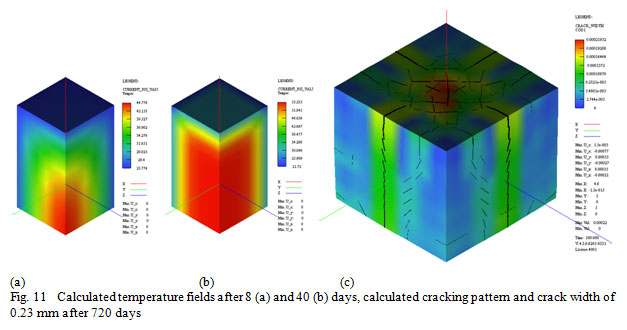 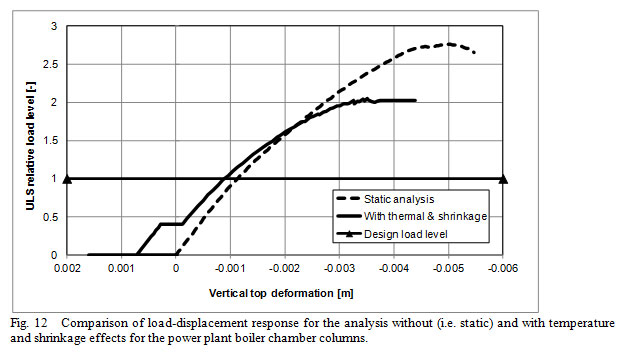