The objective of the digiCON² project is the development of a digital on-site printing process for the production of concrete walls and other vertical structural elements. This technology is a desisive step forward on the path of the introduction of the Industry 4.0 concept to the building industry, a step from already existing digital planing to digital fabrication.

This project will close the gap between CAD data, which exist – together with material rellated data – as input in BIM models, and the physical building process with concrete as output. To achieve this goal, R&D work has to be performed in the fields of software engineering, IT-application for production, process simulation, data flow and data-controled systems as well as systems integration.

The digiCON² goal is to move a computer controled extrusion nozzle for concrete according to a CAD planing data and according to the parameters from the simulation process  (timing),  static calculations (FEM software) and the concrete parameters. This will be managed by the Building Information Modeling (BIM). The concrete walls will be produced layer by layer. This process can be carried out with only little personnel and with the potential of an automatic 24/7 operation. The cost-intensive formwork construction or stone by stone wall construction is no longer necessary. Building time can be significantly shortened by this new digiCON² process and construction costs will be reduced. A very efficient, flexible and resource-saving "digital" construction process will be the final outcome of digiCON², which will be valudated by means of 1:1 experiments within the project.

The following diagram gives an overview of the workflow of digital concrete construction and the neccessary IT and NON-IT modules of digiCON² and how these are connected to each other:

During the project the following new software modules were developed:

The newly developed products are part of the ATENA software, version 5.8 or newer, which is available currently in beta version. 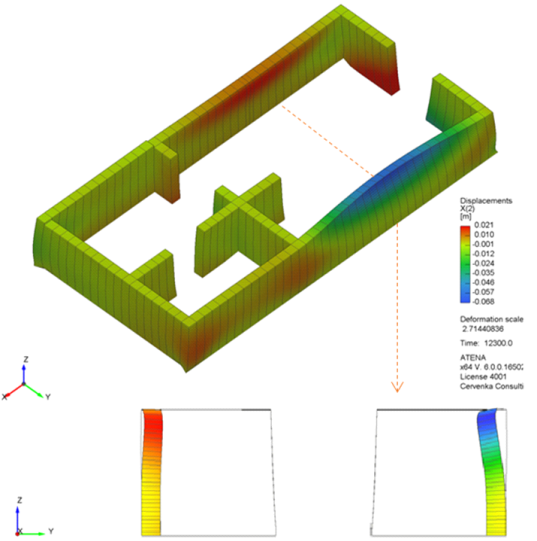 Fig.: Deformed structure with maximum lateral deformation and the cut with the maximal displacements

The new module for ATENA has been developed to simulate and optimize the printing process and speed. The video shows an example analysis when too fast printing results in the wall collapse.

The printing module shows a procedure of such an analysis on the basis of nonlinear FEM, and it describes all extra features that are needed for such a simulation. These are mainly modelling of the detailed construction process of the structure, time variable load and suitable nonlinear constitutive equations for times ranging from fresh to mature concrete conditions. The newly developed computation modules are implemented into software ATENA (Cervenka et al 2018), which is later also used to compute a few sample analyses. The structure is first modelled at its final size and shape neglecting its construction process. Then, based on the prescribed motion of the printing head, a time for the activation of each element is calculated. The next step is the simulation of the manufacturing process. It is carried out at time steps, whereby at each step at a given time the FE model of the structure consists of active elements only and the rest is ignored.

*Project no. TF04000051 has been financed under the DELTA program of TA CR for the support of applied research and experimental development.